Here in Alaska, today is recognized as Indigenous People’s Day. What most of the country refers to as “Columbus Day” is an affront to the cultures that have shaped North America for thousands of years.

One of the most difficult aspects of studying historical newspapers is the lack of representation these papers afforded, especially considering that Alaska is home to the largest indigenous population in the country based on total state population  With the exception of newspapers published by missionary schools, (with the focus on stripping indigenous children of their heritage) white writers of newspaper articles in Alaska treated Alaska Natives as inferior individuals and not worthy of “civilization”. 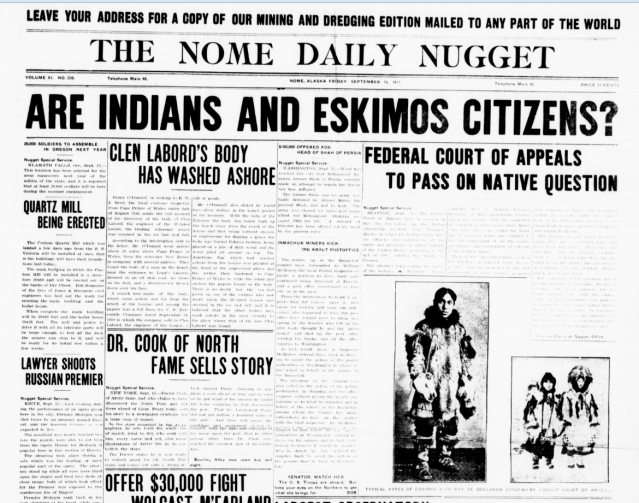 While Italian-Americans faced discrimination in the eighteenth century and the early years of the 20th century, a holiday celebrating a man responsible for the genocide and enslavement of native peoples is disingenuous. (As Marty Kelley points out, there are plenty of notable Italian-Americans worthy of celebration instead of Columbus).

Today is a day to reflect on the legacies, accomplishments, and visibility of native populations throughout the United States. In time, one hopes that Indigenous People’s Day will replace Columbus Day, as it has in Minnesota, South Dakota, and Vermont. (Here is a list of individual cities that celebrate Indigenous People’s Day).