On this day one century ago, amidst the Spanish Influenza and the final days of the First World War, a luxury steam ship called the S.S. Princess Sophia struck Vanderbilt Reef in the Lynn Canal off the coast of Juneau and sank, killing all 350 passengers aboard.

Remembered today as the “Titanic of the North”, the Princess Sophia shipwreck remains the worst disaster at sea on the Pacific Coast.

As recently as October 6, the Alaska State Museum partnered with the Maritime Museum of British Columbia and hosted the traveling exhibit dedicated to the Princess Sophia, which gave visitors a thorough glimpse into life on board the ship, personal artifacts recovered from the wreckage, and newspaper coverage of the tragedy- including an original copy of the Nome Tri-Weekly Nugget from a bound volume. 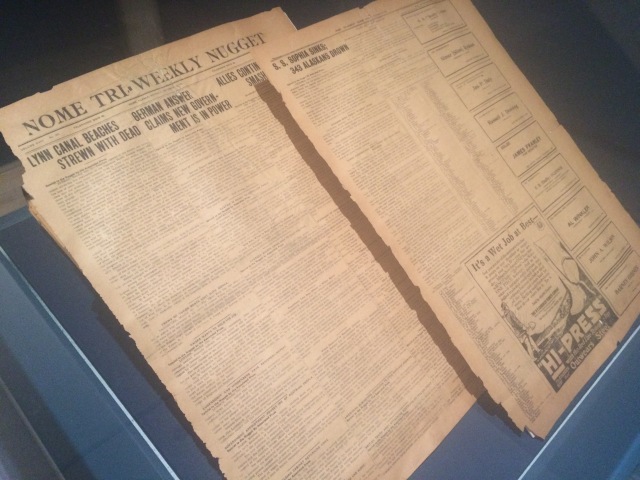 Today, Chronicling America hosts three papers that feature the shipwreck on their front pages, including the Alaska Daily Empire, the Cordova Daily Times, and the Seattle Star:

To commemorate the occasion, Emerson Eads and David Hunsaker created an original opera through the Orpheus Project titled The Princess Sophia, which held its world premiere last night at Juneau-Douglas High School, and will run through October 28.

The Princess Sophia shipwreck remains a vivid tragedy for many Alaskans who lost relatives on board. Given that many people in the Lower 48 have never before heard of the S.S. Princess Sophia, newspaper coverage is an essential primary resource, now available and text-searchable online.